I never used to be a TV girl. For most of my adult life I didn’t have cable. I was (and still am, for most purposes) an outside and active or a an inside and artsy type of lady. I didn’t (and still don’t) like spending my time idly on a coach starring at the great time-wasting-light-box. However as the nights are getting colder I am finding myself craving carbs and mindless television. It doesn’t help at all they everything seems to be premiering this week other than my beloved show The Walking Dead only 3 more weeks! So in between The New Girl and Munchos I am working on another What’s the Word? Wednesday.

What’s the Word? Wednesday if you haven’t been to my blog before is my ongoing blog-series wherein I use the alphabet to showcase an ingredient, technique, or appliance (or anything) that is loosely related to being a vegetarian. I try my best to teach you something about the word I’ve chosen and hopefully make each word seem less daunting and more doable. This week is represented by the letter E and this week E stands for Eggplant. 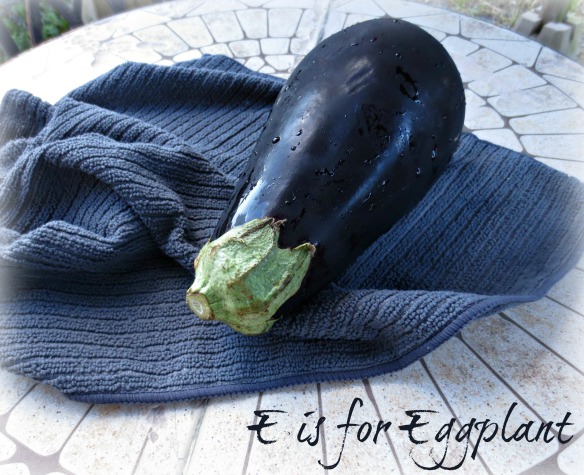 Eggplant, also called aubergine or bringal, is a member of the nightshade family (i.e related to tomatoes). It’s technically a fruit but is generally used in savory dishes and is a very common ingredient in Central and South-East Asia as well as the Middle East and Europe. Wikipedia tells me many things and apparently the British named it eggplant because of its shape, as well as the eggplants they were accustomed to, were smaller than todays standard and cream coloured. There seems to be loads of variety of eggplants and although most of us will associate eggplant with a pear-shaped dark purple vegetable they also come in many sizes and colours ranging from lavender to jade green. Try them now because the eggplant season is over mid to late October.

I love eggplant and whenever I eat it, however it has been prepared, I enjoy it. When I think about describing to you the taste and texture I feel I’m going to fall short and make it sound unappealing when it’s truly delicious. So here I go, the skin is thin and edible and the flesh technically has a slightly bitter taste. There are small seeds that run like veins inside the plant and when it’s raw, eggplant feels spongy but when cooked, it has a soft fleshy texture. I don’t know how to do such a lovely ingredient justice so you are going to have to take my word on it because it really adds an earthy flavour when cooked that a lot people equate to a meaty taste. This plant really absorbs a lot of flavours from what you cook it in but keep in mind it is like a sponge so eggplant can absorb it’s weight in oil. If you have never cooked it before read over your recipe a few times before you jump in, a lot of recipes will include some sort of pre-cooking preparation you should follow to avoid bitterness or unwanted textures. There seems to be a preparation-controversy out in the culinary world about how eggplant is best cooked. A lot of people salt their eggplants heavily while raw to stop it from absorbing as much oil during the cooking process. In my experience, the salting is hit or miss meaning in some recipes it helps and others I didn’t notice a big difference. If you are salt-conscious see what works for you flavour/texture-wise or look for recipes with alternative methods to prepare or cook the eggplant.

Where do I use it?

Baby eggplants are great to use in stir fries or stuff with savoury cheese and nuts to make appetizers or side dishes. Larger eggplants can be halved and stuffed as well however they have many other amazing uses. I particularly like them in spicy Indian or Thai curries, or grilled with Mediterranean herbs and lemon and used on sandwiches, pizzas or in cold salads. My favorite dish of all time is eggplant Parmesan which is a wonderful alternative to lasagne. I have provided a link to my recipe below as well as one for baba ghanoush which is a creamy dip make from grilled eggplant.

Are there health benefits?

I was reading up about eggplants on World’s Healthiest Foods (WHF) and I didn’t realize they were a good source of potassium as well as Vitamin B3 and B6. The articles goes on to mention that eggplants are very rich in a potent anti-oxident called nasunin which is linked to quite a few amazing things. Nasunin not only makes eggplant a powerful brain food by protecting you lipid-rich brain cells from free-radicals but it is also linked to warding off bad cholesterol, cancer and common viruses.

V-Spot suggestions for using food in your dehydrator:

Tell me what you think! Cancel reply